Water water everywhere, and what a pain in the ass it was/is!

We have had a lot of water in the last few days, so much that the backyard that we cleared has become a flood plain. I'll document what happened/what I remember here for next years preps.

Few weeks ago I met C, the new neighbor on the right. I met him when the rains had washed a 3' section of his driveway out, he and I talked about dredging out the creek to make it more of a straight shot to his bridge. He had just paid someone to bring in a load of gravel to fill the break. He showed me around his property at the top and he wants a bee hive.

Fast forward to last weekend (12/4-5/2015), large storms coming in, and the creek flooded his driveway again. Let me explain how the creek was. It travels across the bottom of the hill from my neighbors house on the left (W), across my property, then across C's place, then continues on. Past owners had redirected the creeks path so that they could put a well in the creek bed. A bad thing to do. With this change, the the creek came to the driveway, then driveway berm forced the water to turn right 90 degrees, travel down the driveway, then turn left 90 degrees where it went under his driveway bridge. Not the best idea.

The water washed thru the driveway at the 1st 90 degree turn. about 6' wide and 2' deep. Luckily his truck was not at his house when this happened. We came home Sun night and the water had over run the 2nd 90 degree turn and was going down his ditch to the road and was washing out his driveway where it met the road.

During the week we received about 2" of rain every day.

Sunday night the septic high liquid alert went off. I made an appt for someone to come out so I could learn what needs to be done. The 3rd tank of the septic system is getting ground water in it, I just need to reduce the amount of water around the tanks so I put a 10x20 tarp over the tanks so they can dry out.

Tuesday the amount of water on the lawn was not to bad, but water was pooling up on the uphill and downhill sides of the house, but not to badly. Only a few inches.

Wednesday things speeded up. The amount of water around the house increased and was getting close to the bottom of the house. I checked out where it was coming from and found that the water was coming thru the bushes by the shed, the water was seeping thru the creek up hill and coming into my yard and with the slope, going straight towards the house. Time for action!

My son and I started to dig ditches and put up redirection berms to lead the water away from the slope into the house. This worked for a little while. but we needed a better solution. My wife went to HomeDespot to see what they had and came back with a utilitiy pump to pump the water away from the house. It can use a normal garden hose which allows the water to be pumped away slowly.
She also bought several 'Floor Barriers'. These work quite well, but are not cheap. The rest of Wednesday was spent trying to improve the water redirection.

Thursday I bought more 'Flood barriers' and made more paths as the water continued to flow more thru the bushes.


Since the road was damaged by the washout at my neighbors, there were people from the County Public works out looking at the damage and seeing what can be done.

We received another 2" of rain Thurs night, the pool at the top of the house started to fill again and get really high, L/I kept the pump on all night and she stayed up to 5am checking on it.

I was up to midnight moving the flood barriers around to direct the water coming off of the hill to create a stream going between the shed/pumphouse so it can drain into the back yard which is a flood plain now.

Fri am I was at HomeDespot at 6am to get another $200 of flood barriers and 10 sandbags so I could make a larger pool to direct water top the stream I created between the sheds. i also started a new barrier to direct water coming off of the neighbors to move it to the grassy area in back so it goes away from the house.

I also upgraded the pump hose from a garden hose to 1.25 hose and that makes the draining of the up house lake a lot faster.

I just talked with the people from the Dept of Public Works and Dept of Fish and Wildlife, since this affected the road, they are bringing in a culvert to fix the road and they are doing to dig out the old creek bed so it will go straight to the neighbors bridge so this should make it easier for the water to travel thru and not flood my area.

They started this Friday around 11am, they had to rent an excavator and change the oil to a non toxic oil since this is a wildlife/stream area. The excavator worked for several hours and now I have a new creek bed and the water is no longer flooding my back area. I still have water coming from under the bushes but that is easier to deal with.

Some pictures:
The stream in May: 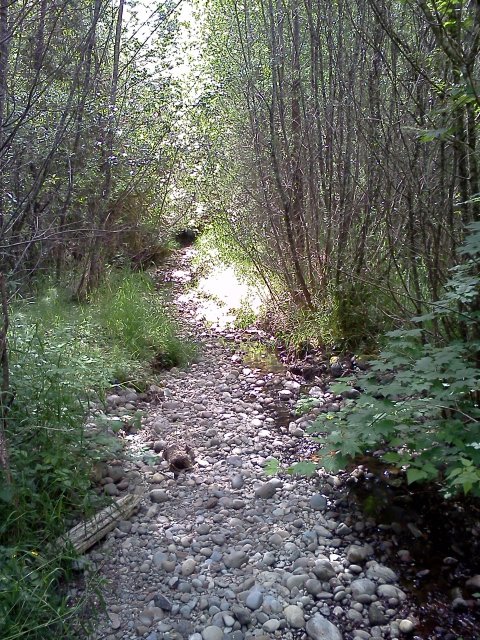 The stream on Wednesday: 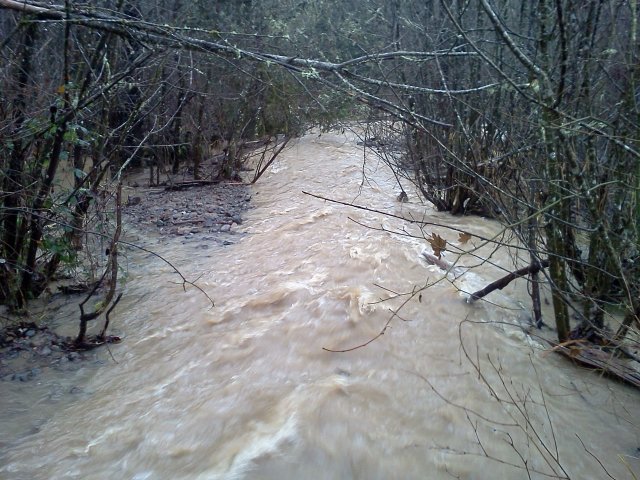 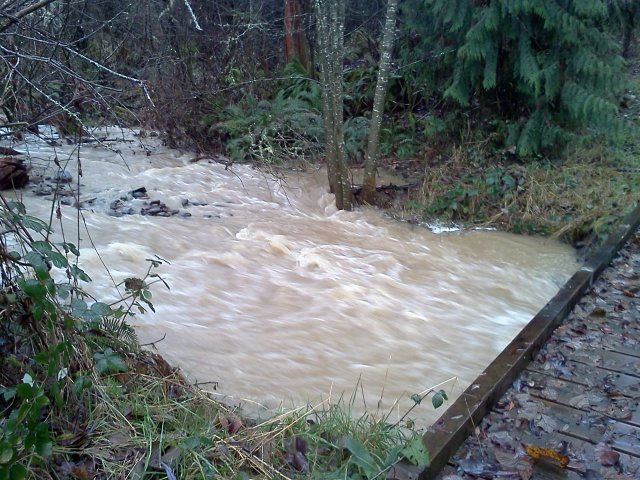 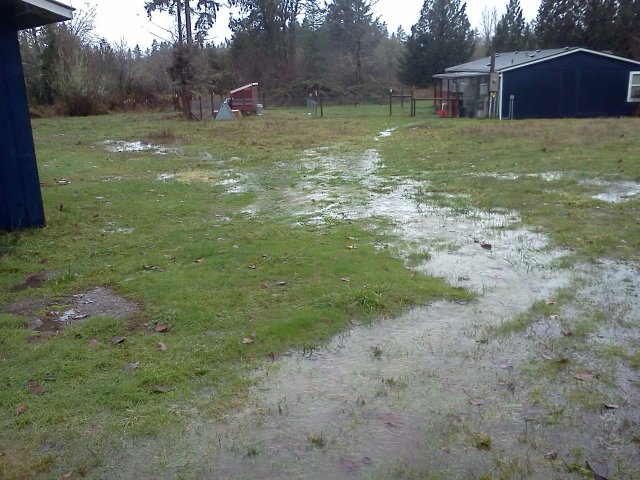 The standing water around the house: 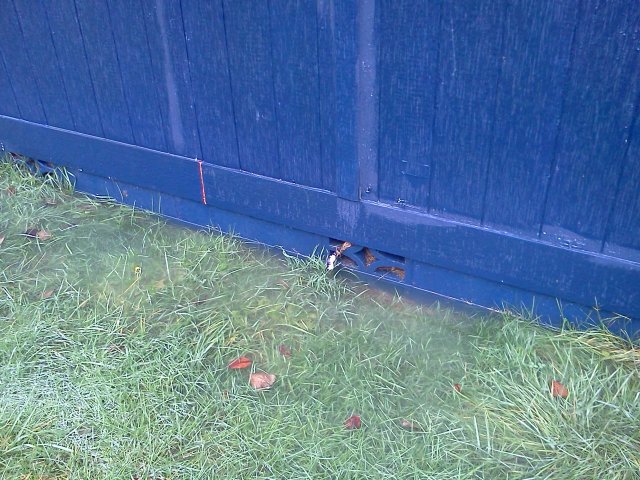 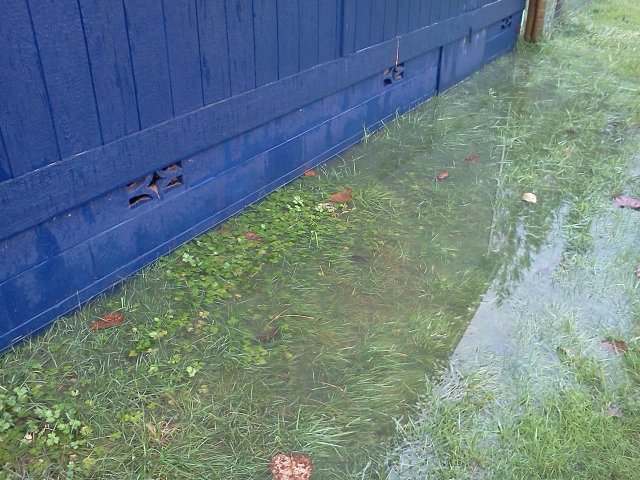 My neighbors driveway where it meets the road: 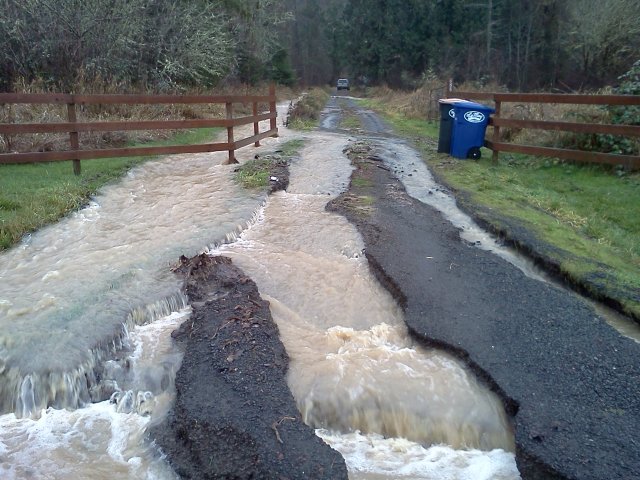 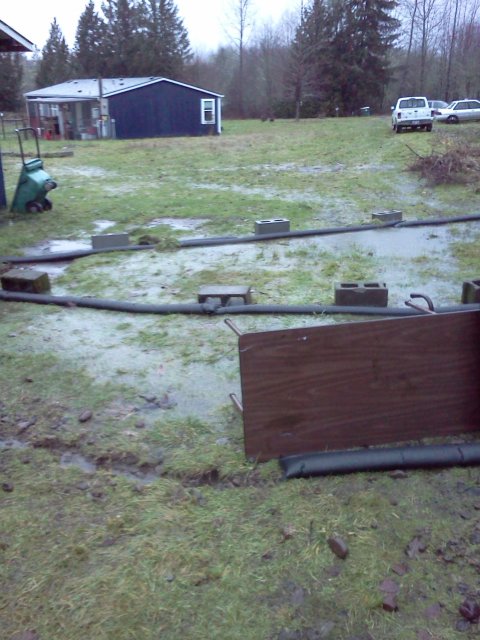 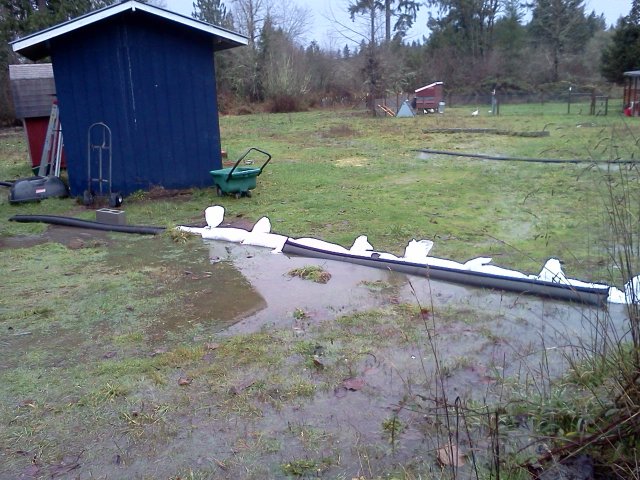 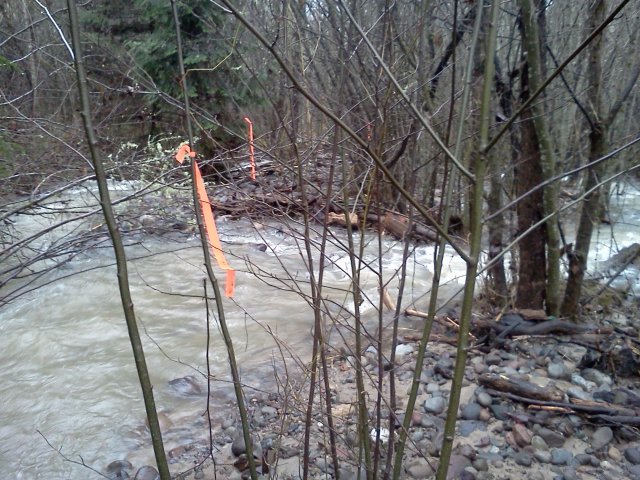 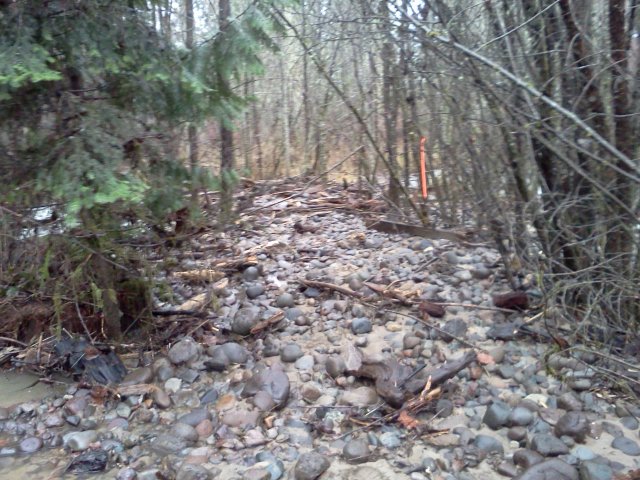 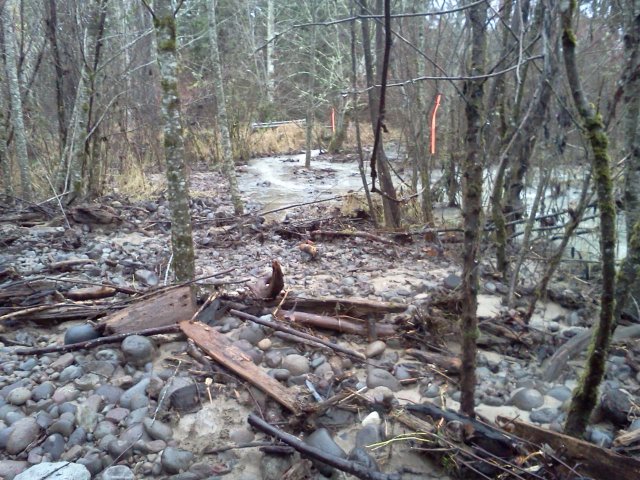 The excavator at work: 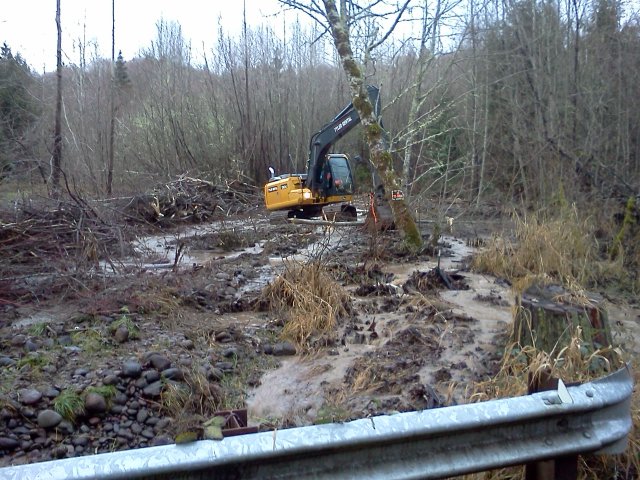 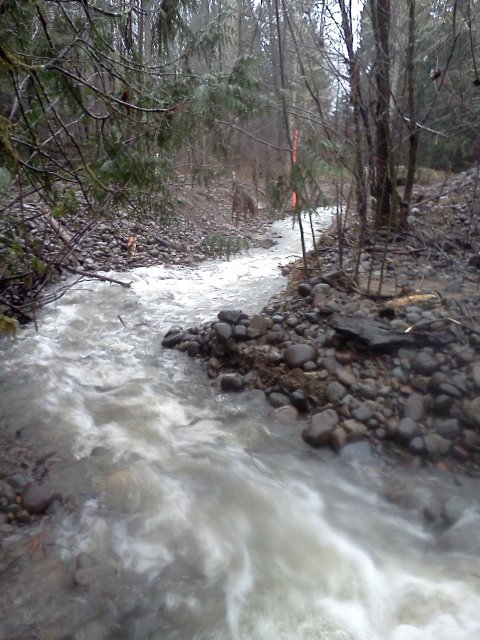 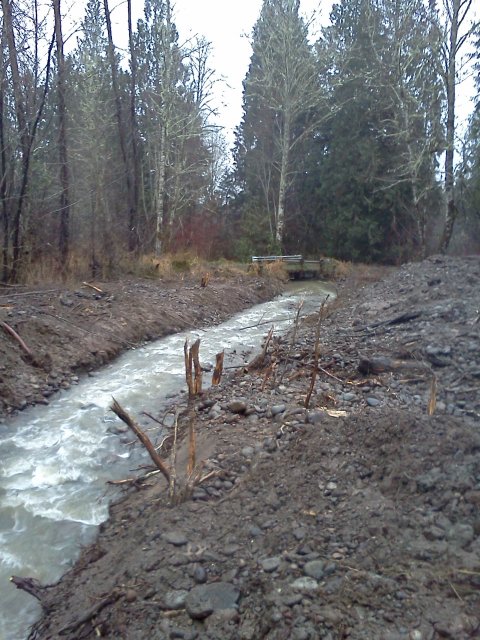 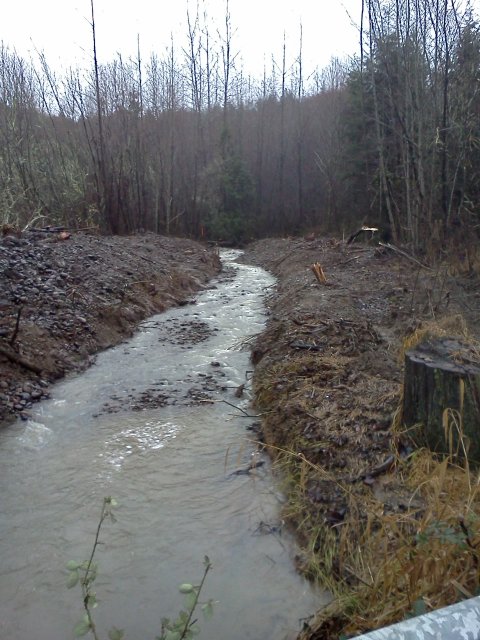